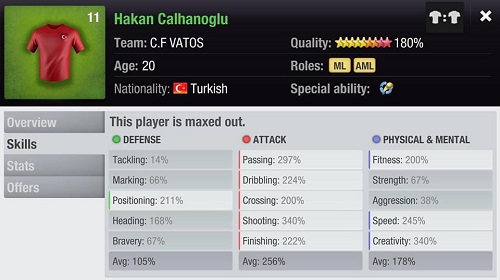 The 180% rule is a training concept and having a sound understanding of this rule will help you train players far better over the long run. As players’ ratings get higher, using certain training drills has less effect on improving the players quality. So we need to look at each individual rating and work out which training drill(s) would be best to continue improving your player using the 180% rule.

If you add up all the values from all the attributes in the screenshot with the player at 180% you will get 2700, this means that you can’t get more than 2700 percentage points in a player through training. It’s a limit that is set by Nordeus. You are used to seeing players with different values in their attributes with the white attributes usually higher than the grey. But let’s imagine you have a player with all his attributes at 180%, then the average quality would be 180% and you wouldn’t be able to raise any attribute anymore because the player is at the maximum overall rating of 180%. If you wanted to increase the Shooting attribute by 10%, you would need to take away 10% from another attribute.

For example you can have 190% shooting but with 170% marking and all the other attributes at 180%, because all 15 attributes would still average 180%. 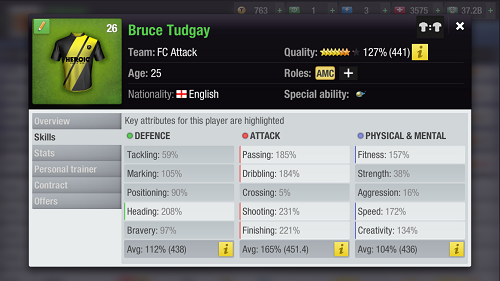 Each training drill trains certain attributes of a player. To work out how effective any drill will be, we simply need to add up the players existing ratings for those attributes. The higher the combined ratings, the less effective the training will be. 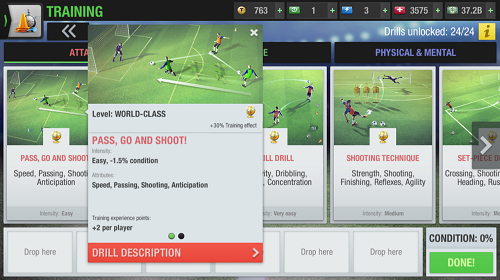 So lets look at the Pass, Go & Shoot drill for Bruce Tudgay. This drill trains Speed, Passing, Shooting & Anticipation. We can ignore Anticipation as that drill is for a GK. So we have three drills that will improve the player. With 180% being the maximum rating, we can do a simple maths equation to work out how effective this drill will be. 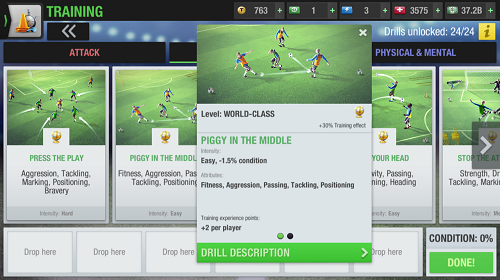 Now lets look at the Piggy in the Middle training drill and add up his ratings for this drill. There are 5 attributes that this drill will improve so again, we do the simple equation.

So with this drill we have 397% to play with, nearly half of the maximum rating. This player will continue to improve in those five attributes quite easily, however, we are only interested in Fitness and Passing as they are white attributes. Both training drills in our example include the Passing attribute, but due to his high ratings in the Pass, Go & Shoot example, only Piggy in the Middle would improve his Passing.

The only reason a player can have such high white attributes is because they have very low grey attributes, so as to compensate for the increase in one side (white attributes) we must see a reduction in the other side (grey attributes). But the limit in training is the same, 2700 percentage points at 180% in average quality over all 15 attributes.