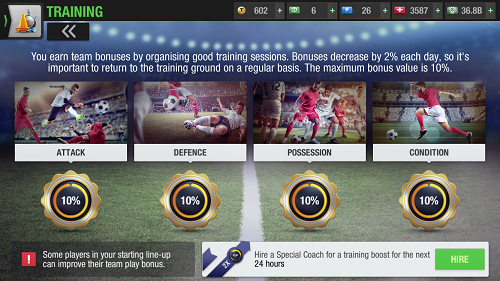 Training bonuses are a good way to boost your players’ performance during each match. There are four areas where you can increase your teams performance by a maximum of 10%, so a 40% team bonus altogether. Those areas are defence, attack, possession and condition.

You can increase your training bonuses by running good training sessions and you must train your players daily to keep the bonuses at their maximum as each bonus decreases by 2% each day, as you probably know. Once we get these bonuses up to 10%, it really is just a case of running a certain training drill a few times each day to top your team bonuses back up to 10% for each area.

The training drills you need to select are the ones that will boost your bonuses the most without lowering your player condition too much. There are two specific drills from Physical & Mental, two more from Attack and the final two are from Defence, that you must select in order to get the desired result.

The training drills are… 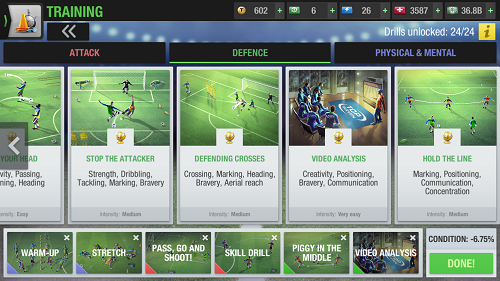 As you can see, these 6 drills put together only uses 6.75% condition, this means you are able to run this drill numerous times before your players’ condition drops below 30%. Luckily, assuming your players have a 99% condition, they won’t drop much below 80% by the time you have finished.

Now we need to see which players we need to select to train. You need to select 8 players from certain positions. This is why you should always try and keep a big squad and have plenty of players in reserve so you don’t need to use your first team for this trick. You need to select four defensive players (GK, DR, DC, DL, DMC) and four attacking players (MR, MC, ML, AMR, AMC, AML, ST). You will need at least four midfield players (DMC, MR, MC, ML, AMR, AMC, AML) to boost your possession bonus and you must train eight players from any position to boost your condition bonus. 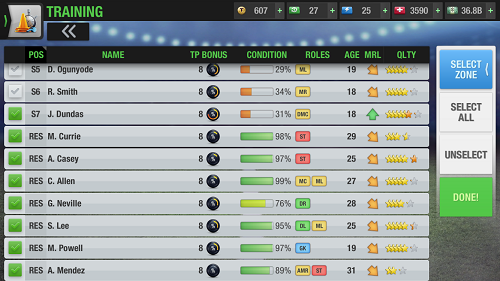 You should run these quick drills every morning as not only will you start each match that day with a 40% team bonus, you also have the opportunity to give your team an extra boost during the match. You can pick any of the four areas to boost and you will get an extra 50% bonus for 20 minutes at a time. So you can always have one of your team bonuses at 15% during match play, giving you a 45% team bonus during each match.

This Top Eleven tip works even better if you use our guide to maximize your players’ TP bonuses as well. Your players’ performance and results will significantly improve.

Come back next season for a BRAND NEW topeleventips.com Friendly Championship!